These remarks raise some important questions: Just how democratic is the United States? Whose interests do our elected representatives serve? Is political power concentrated in the hands of a few or widely dispersed among all segments of the population? These and other related questions lie at the heart of theories of power and society. Let’s take a brief look at some of these theories.

Recall (from Chapter 1 “Sociology and the Sociological Perspective”) that the smooth running of society is a central concern of functionalist theory. When applied to the issue of political power, functionalist theory takes the form of pluralist theory, which says that political power in the United States and other democracies is dispersed among several “veto groups” that compete in the political process for resources and influence. Sometimes one particular veto group may win and other times another group may win, but in the long run they win and lose equally and no one group has any more influence than another (Dahl, 1956). 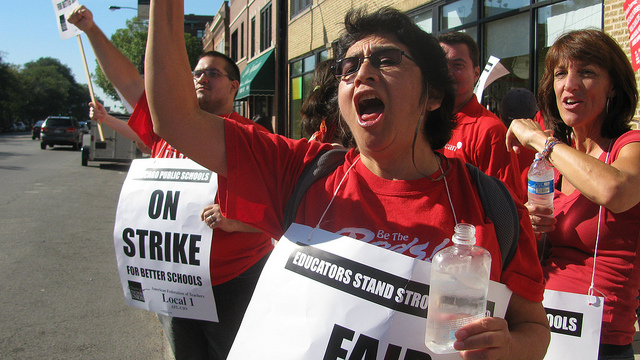 This photo of a labor strike depicts an example of the competition between two veto groups, labor and management, that characterizes American democracy. Pluralist theory assumes that veto groups win and lose equally in the long run and that no one group has more influence than another group.

As this process unfolds, says pluralist theory, the government might be an active participant, but it is an impartial participant. Just as parents act as impartial arbiters when their children argue with each other, so does the government act as a neutral referee to ensure that the competition among veto groups is done fairly, that no group acquires undue influence, and that the needs and interests of the citizenry are kept in mind.

The process of veto-group competition and its supervision by the government is functional for society, according to pluralist theory, for three reasons. First, it ensures that conflict among the groups is channeled within the political process instead of turning into outright hostility. Second, the competition among the veto groups means that all of these groups achieve their goals to at least some degree. Third, the government’s supervision helps ensure that the outcome of the group competition benefits society as a whole.

Conflict theory focuses on the social inequalities and power difference within a group, analyzing society through this lens. Philosopher and social scientist Karl Marx was a seminal force in developing the conflict theory perspective; he viewed social structure, rather than individual personality characteristics, as the cause of many social problems, such as poverty and crime. Marx believed that conflict between groups struggling to either attain wealth and power or keep the wealth and power they had was inevitable in a capitalist society, and conflict was the only way for the underprivileged to eventually gain some measure of equality.

Several elite theories dispute the pluralist model. According to these theories, power in democratic societies is concentrated in the hands of a few wealthy individuals and organizations—or economic elites—that exert inordinate influence on the government and can shape its decisions to benefit their own interests. Far from being a neutral referee over competition among veto groups, the government is said to be controlled by economic elites or at least to cater to their needs and interests. As should be clear, elite theories fall squarely within the conflict perspective as outlined in Chapter 1 “Sociology and the Sociological Perspective”.

Perhaps the most famous elite theory is the power-elite theory of C. Wright Mills (1956), who elaborated on some of Marx’s concepts. According to Mills, the power elite is composed of government, big business, and the military, which together constitute a ruling class that controls society and works for its own interests, not for the interests of the citizenry. Members of the power elite, Mills said, see each other socially and serve together on the boards of directors of corporations, charitable organizations, and other bodies. When cabinet members, senators, and top generals and other military officials retire, they often become corporate executives. Conversely, corporate executives often become cabinet members and other key political appointees. This circulation of the elites helps ensure their dominance over American life.

Mills’s power-elite model remains popular, but other elite theories exist. They differ from Mills’s model in several ways, including their view of the composition of the ruling class. Several theories see the ruling class as composed mostly of the large corporations and wealthiest individuals and see government and the military serving the needs of the ruling class rather than being part of it, as Mills implied. G. William Domhoff (2010) says that the ruling class is composed of the richest 0.5% to 1% of the population, who control more than half the nation’s wealth, sit on the boards of directors just mentioned, and are members of the same social clubs and other voluntary organizations. Their control of corporations and other economic and political bodies helps maintain their inordinate influence over American life and politics.

Other elite theories say the government is more autonomous—not as controlled by the ruling class—than Mills thought. Sometimes the government takes the side of the ruling class and corporate interests, but sometimes it opposes them. Such relative autonomy, these theories say, helps ensure the legitimacy of the state, because if it always took the side of the rich it would look too biased and lose the support of the populace. In the long run, then, the relative autonomy of the state helps maintain ruling class control by making the masses feel the state is impartial when in fact it is not (Thompson, 1975).

As a way of understanding power in the United States and other democracies, pluralist and elite theories have much to offer, but neither type of theory presents a complete picture. Pluralist theory errs in seeing all special-interest groups as equally powerful and influential. Certainly the success of lobbying groups such as the National Rifle Association and the American Medical Association in the political and economic systems is testimony to the fact that not all special-interest groups are created equal. Pluralist theory also errs in seeing the government as a neutral referee. Sometimes the government does take sides on behalf of corporations by acting, or failing to act, in a certain way.

For example, U.S. antipollution laws and regulations are notoriously weak because of the influence of major corporations on the political process. Through their campaign contributions, lobbying, and other types of influence, corporations help ensure that pollution controls are kept as weak as possible (Simon, 2008). This problem received worldwide attention in the spring of 2010 after the explosion of an oil rig owned by BP, a major oil and energy company, spilled tens of thousands of barrels of oil into the Gulf of Mexico in the biggest environmental disaster in U.S. history. As the oil was leaking, news reports emphasized that individuals or political action committees (PACs) associated with BP had contributed $500,000 to U.S. candidates in the 2008 elections, that BP had spent $16 million on lobbying in 2009, and that the oil and gas industry had spent tens of millions of dollars on lobbying that year (Montopoli, 2010).

Although these examples support the views of elite theories, the theories also paint too simple a picture. They err in implying that the ruling class acts as a unified force in protecting its interests. Corporations sometimes do oppose each other for profits and sometimes even steal secrets from each other, and governments do not always support the ruling class. For example, the U.S. government has tried to reduce tobacco smoking despite the wealth and influence of tobacco companies. While the United States, then, does not entirely fit the pluralist vision of power and society, neither does it entirely fit the elite vision. Yet the evidence that does exist of elite influence on the American political and economic systems reminds us that government is not always “of the people, by the people, for the people,” however much we may wish it otherwise.

Other sociologists study government and power by relying on the framework of symbolic interactionism, which is grounded in the works of Max Weber and George H. Mead.

Symbolic interactionism, as it pertains to government, focuses its attention on figures, emblems, or individuals that represent power and authority. Many diverse entities in larger society can be considered symbolic: trees, doves, wedding rings. Images that represent the power and authority of the United States include the White House, the eagle, and the American flag. The Seal of the President of the United States, along with the office in general, incites respect and reverence in many Americans.

Symbolic interactionists are not interested in large structures such as the government. As micro-sociologists, they are more interested in the face-to-face aspects of politics. In reality, much of politics consists of face-to-face backroom meetings and lobbyist efforts. What the public often sees is the front porch of politics that is sanitized by the media through gatekeeping.