Since ancient times, people have been fascinated by the relationship between individuals and the societies to which they belong. The ancient Greeks might be said to have provided the foundations of sociology through the distinction they drew between physis (nature) and nomos (law or custom). Whereas nature or physis for the Greeks was “what emerges from itself” without human intervention, nomos in the form of laws or customs, were human conventions designed to constrain human behavior. The modern sociological term “norm” (i.e., a social rule that regulates human behavior) comes from the Greek term nomos. Histories by Herodotus (484–425 BCE) was a proto-anthropological work that described the great variations in the nomos of different ancient societies around the Mediterranean, indicating that human social life was not a product of nature but a product of human creation. If human social life was the product of an invariable human or biological nature, all cultures would be the same. The concerns of the later Greek philosophers — Socrates (469–399 BCE), Plato (428–347 BCE), and Aristotle (384–322 BCE) — with the ideal form of human community (the polis or city-state) can be derived from the ethical dilemmas of this difference between human nature and human norms. The ideal community might be rational but it was not natural.

In the 13th century, Ma Tuan-Lin, a Chinese historian, first recognized social dynamics as an underlying component of historical development in his seminal encyclopedia, General Study of Literary Remains. The study charted the historical development of Chinese state administration from antiquity in a manner very similar to contemporary institutional analyses. The next century saw the emergence of the historian some consider to be the world’s first sociologist, the Berber scholar Ibn Khaldun (1332–1406) of Tunisia. His Muqaddimah: An Introduction to History is known for going beyond descriptive history to an analysis of historical processes of change based on his insights into “the nature of things which are born of civilization” (Khaldun quoted in Becker and Barnes, 1961). Key to his analysis was the distinction between the sedentary life of cities and the nomadic life of pastoral peoples like the Bedouin and Berbers. The nomads, who exist independent of external authority, developed a social bond based on blood lineage and “esprit de corps” (‘Asabijja), which enabled them to mobilize quickly and act in a unified and concerted manner in response to the rugged circumstances of desert life. The sedentaries of the city entered into a different cycle in which esprit de corps is subsumed to institutional power and the intrigues of political factions.  The need to be focused on subsistence is replaced by a trend toward increasing luxury, ease, and refinements of taste. The relationship between the two poles of existence, nomadism and sedentary life, was at the basis of the development and decay of civilizations (Becker and Barnes, 1961).

However, it was not until the 19th century that the basis of the modern discipline of sociology can be said to have been truly established. The impetus for the ideas that culminated in sociology can be found in the three major transformations that defined modern society and the culture of modernity: (1) the development of modern science from the 16th century onward, (2) the emergence of democratic forms of government with the American and French Revolutions (1775–1783 and 1789–1799 respectively), and (3) the Industrial Revolution beginning in the 18th century. Not only was the framework for sociological knowledge established in these events, but also the initial motivation for creating a science of society. Early sociologists like Comte and Marx sought to formulate a rational, evidence-based response to the experience of massive social dislocation brought about by the transition from the European feudal era to capitalism. This was a period of unprecedented social problems, from the breakdown of local communities to the hyper-exploitation of industrial labourers. Whether the intention was to restore order to the chaotic disintegration of society, as in Comte’s case, or to provide the basis for a revolutionary transformation in Marx’s, a rational and scientifically comprehensive knowledge of society and its processes was required. It was in this context that “society” itself, in the modern sense of the word, became visible as a phenomenon to early investigators of the social condition.

The development of modern science provided the model of knowledge needed for sociology to move beyond earlier moral, philosophical, and religious types of reflection on the human condition. Key to the development of science was the technological mindset that Max Weber termed the disenchantment of the world: “principally there are no mysterious incalculable forces that come into play, but rather one can, in principle, master all things by calculation” (1919). The focus of knowledge shifted from intuiting the intentions of spirits and gods to systematically observing and testing the world of things through science and technology. Modern science abandoned the medieval view of the world in which God, “the unmoved mover,” defined the natural and social world as a changeless, cyclical creation ordered and given purpose by divine will. Instead modern science combined two philosophical traditions that had historically been at odds: Plato’s rationalism and Aristotle’s empiricism (Berman, 1981). Rationalism sought the laws that governed the truth of reason and ideas, and in the hands of early scientists like Galileo and Newton, found its highest form of expression in the logical formulations of mathematics. Empiricism sought to discover the laws of the operation of the world through the careful, methodical, and detailed observation of the world. The new scientific worldview therefore combined the clear and logically coherent, conceptual formulation of propositions from rationalism, with an empirical method of inquiry based on observation through the senses. Sociology adopted these core principles to emphasize that claims about social life had to be clearly formulated and based on evidence-based procedures. It also gave sociology a technological cast as a type of knowledge which could be used to solve social problems.

The emergence of democratic forms of government in the 18th century demonstrated that humans had the capacity to change the world. The rigid hierarchy of medieval society was not a God-given eternal order, but a human order that could be challenged and improved upon through human intervention. Through the revolutionary process of democratization, society came to be seen as both historical and the product of human endeavors. Age of Enlightenment philosophers like Locke, Voltaire, Montaigne, and Rousseau developed general principles that could be used to explain social life. Their emphasis shifted from the histories and exploits of the aristocracy to the life of ordinary people. Mary Wollstonecraft’s A Vindication of the Rights of Women (1792) extended the critical analysis of her male Enlightenment contemporaries to the situation of women. Significantly for modern sociology they proposed that the use of reason could be applied to address social ills and to emancipate humanity from servitude. Wollstonecraft for example argued that simply allowing women to have a proper education would enable them to contribute to the improvement of society, especially through their influence on children. 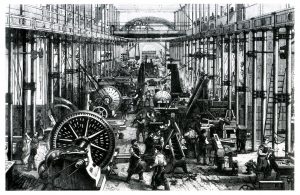 The Industrial Revolution in a strict sense refers to the development of industrial methods of production, the introduction of industrial machinery, and the organization of labor to serve new manufacturing systems. These economic changes emblemize the massive transformation of human life brought about by the creation of wage labor, capitalist competition, increased mobility, urbanization, individualism, and all the social problems they wrought: poverty, exploitation, dangerous working conditions, crime, filth, disease, and the loss of family and other traditional support networks, etc. It was a time of great social and political upheaval with the rise of empires that exposed many people — for the first time — to societies and cultures other than their own. Millions of people were moving into cities and many people were turning away from their traditional religious beliefs. Wars, strikes, revolts, and revolutionary actions were reactions to underlying social tensions that had never existed before and called for critical examination. August Comte in particular envisioned the new science of sociology as the antidote to conditions that he described as “moral anarchy.”

Sociology therefore emerged; firstly, as an extension of the new worldview of science; secondly, as a part of the Enlightenment project and its focus on historical change, social injustice, and the possibilities of social reform; and thirdly, as a crucial response to the new and unprecedented types of social problems that appeared in the 19th century with the Industrial Revolution. It did not emerge as a unified science, however, as its founders brought distinctly different perspectives to its early formulations.

Wollstonecraft, Mary. (1792). A vindication of the rights of women with strictures on moral and political subjects. London: Joseph Johnson.